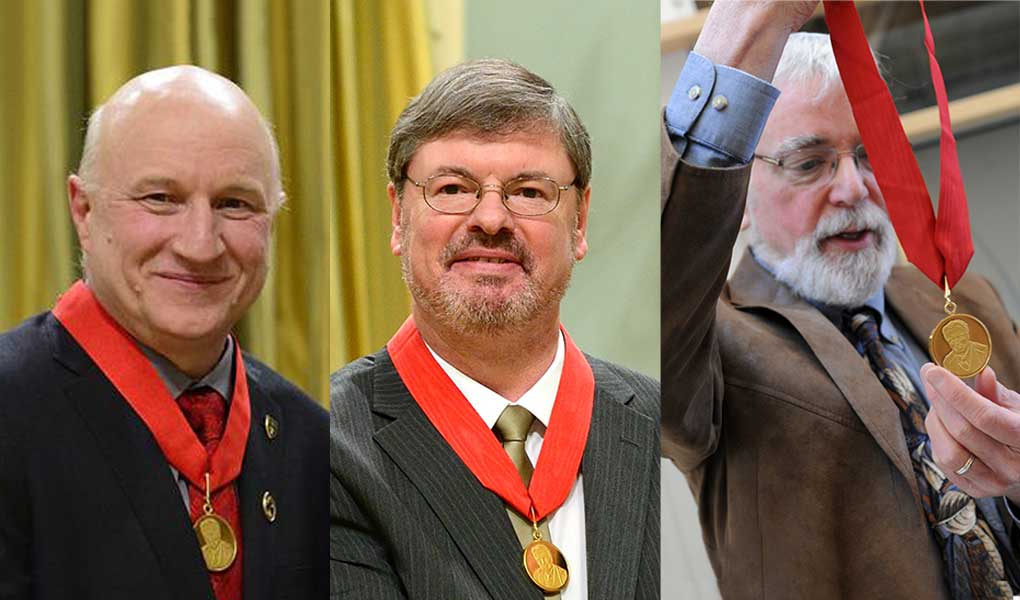 A molecular biologist who has reshaped our understanding of genetics multiple times over. A theoretical chemist with two of the most cited papers of all time. A battery researcher helping supercharge a sustainable energy future. Three Herzberg Canada Gold Medal winners in four years.

For Dalhousie to host three Herzberg Canada Gold Medal winners is a rare feat, one that only three other universities in Canada can claim. To have three recipients in four years—that’s an extraordinary run, the sort that pushes Dalhousie’s research profile to the national and international stage like never before.

Presented by the Natural Sciences and Engineering Research Council (NSERC), the Herzberg Medal celebrates sustained excellence and influence across a career. With a $1-million prize attached, it’s arguably Canada’s most prestigious science award. Its only rival in that regard is the Killam Prize—and, incredibly, two of Dal’s Herzberg winners have received that award the past two years as well.

That Ford Doolittle, Axel Becke and Jeff Dahn are worthy of such acclaim is hardly news to the mentors, colleagues and students who’ve worked with them over the years. We spoke with some of them to help unpack what makes Dal’s Herzberg trio such an impressive set.

Ford Doolittle has no qualms about courting controversy. At multiple stages in his career, he’s floated ideas and research findings that raised eyebrows and dissents among his peers: proving a much-debated hypothesis for the origin of chloroplasts; suggesting that most DNA is “selfish” and serves a parasitic function; arguing for gene-swapping as crucial to early evolution, a finding that metaphorically hacked apart Darwin’s “Tree of Life” concept.

Today, each of these are widely accepted tenants of the field—and Dr. Doolittle is one of the most renowned molecular geneticists in the world. His 300-plus articles have earned him national and international awards, and leadership roles on global projects in genetics and microbiomes. Through his meticulous, thoughtful research into the basics of cell evolution and the forces that structure genomes, he’s shed new light, time and time again, on the building blocks of life itself.

Dr. Doolittle invested half of his Herzberg prize funding back into Dalhousie’s Centre for Comparative Genomics and Evolutionary Bioinformatics (CGEB), helping the acclaimed interdisciplinary centre hire more graduate students and post-doctoral fellows and aiding his own pursuit of conceptual problems in evolutionary biology—an ongoing project. And in May 2017, he added another esteemed award to his list of honours: the prestigious Killam Prize in the Natural Sciences, presented by Canada Council for the Arts.

“He’s highly committed to the value of pure scientific research—research that doesn’t have a specific goal other than answering a big and important question. But he believes, as I do, that it contributes to an increasing body of knowledge that other people will be able to put together in quite unantici-pated ways. And Ford is a disruptor. He doesn’t hesitate to challenge existing dogma, and he does it in quite a systematic but persistent way. He’s very much committed to a combination of excellence and rigour in scientific research with a philosophical approach.”
–Michael Gray, professor emeritus at Dalhousie, who worked alongside Dr. Doolittle for nearly 40 years in the Department of Biochemistry and Molecular Biology.

“Ford was always emphasizing the big picture of your project, and he always wanted to address really big questions. He never shies away from the broadest level questions about evolution such as as why our genes and genomes are structured the way they are and what is the true nature of the tree of life. So many people argue that biology and biochemistry are a data-driven science, and that’s true enough, but a lot of people don’t think enough about the bigger picture—the bigger ‘why’ questions. I think that’s what first attracted me to work with Ford and has inspired me over the years.”
–Andrew Roger, current director of the CGEB who came to Dalhousie to work with Dr. Doolittle as a PhD student in the early 1990s.

In 2014, the scientific journal Nature published a list of the most-cited academic papers of all time, across all disciplines. Chemistry Professor Axel Becke had not one, but two papers in the top 25, the highest ranked number eight. Those papers—remarkably, both single-author studies—account for a sizeable portion of his impressive (and growing) total of 120,000-plus citations.

Why has Dr. Becke’s scholarship become such a reference point? Because his computational work has dramatically expanded the application of the “density-functional” theory of electronic structure—a speedier, simpler method to calculate the properties of chemical systems and materials. Almost all computational chemistry software programs in the world now use his formulas, and it’s a safe bet that your home is filled with new products whose design is aided by calculations based on his methods.

Like Dr. Doolittle, Dr. Becke also added the Canada Council’s Killam Prize in the Natural Sciences to his litany of honours, receiving the award last year. And he also donated a sizeable portion of his Herzberg winnings to support further research at Dal by creating the Herzberg-Becke Chair in Theoretical Chemistry (now held by his former student Erin Johnson), a donation which allowed the Department of Chemistry to hire an additional researcher in theoretical chemistry.

“He has a natural aptitude and talent. He’s very knowledgeable and skilled in applied mathematics, and has a very strong background in physics… someone could be a very good chemist but they wouldn’t be able to do the type of work he does without that mathematical ability and insight and the strong knowledge of physics. He works on a very fundamental level. He has taken theoretical formalisms that could not really be implemented in a very practical way for calculations, and he came up with methods that allowed those calculations to actually be feasible. The work he’s done has impact across the whole spectrum: pharmaceutical companies, organizations like NASA, they all do calculations based on Axel’s theories.” –Russell Boyd, professor emeritus at Dalhousie, who supervised Dr. Becke’s Killam postdoctoral fellowship in the Department of Chemistry in 1981 and then helped bring him back to campus as a Killam Chair in 2006.

“He’s such an excellent, clear scientific speaker and has a unique way of looking at problems. He has an excellent physical intuition so that, if he’s confronted with a new problem, he can reduce it to a simple picture and present his science in a way that others can easily visualize. His contributions are so very fundamental to all of chemistry. The methods that he developed can be applied to model all kinds of chemical problems… Pretty much any chemical system you’d want to model theoretically, you’re going to be using methods that Axel developed, or techniques based on those methods.”
–Erin Johnson, a former PhD student of Dr. Becke’s who now works alongside him on campus as the Herzberg-Becke Chair in Theoretical Chemistry

From cell phones and laptops to electric cars, the lithium-ion battery powers our modern world. And for more than three decades, Jeff Dahn has been helping make lithium-ion batteries safer, longer-lasting and more powerful. An inaugural recipient of the Governor General’s Award for Innovation in 2016, Dr. Dahn and his team have patented nearly 70 inventions, and compounds developed together with his postdocs and students are licensed for use in power tool batteries, electric vehicles and other devices worldwide.

For nearly his entire career, Dr. Dahn has collaborated with companies like 3M and Tesla Motors, allowing his team to apply its talents directly to the battery industry’s most pressing problems. That experience helps explain why so many of his students end up in major roles with battery and energy companies after graduation—or starting their own. It’s one more way Dr. Dahn’s leadership is helping shape a more sustainable energy future.

In 2016, Telsa Motors signed its first ever university partnership. The five-year exclusive collaboration with Dalhousie focused on increasing the lifetime, decreasing the cost and improving the energy density of lithium-ion batteries. Tech developed by Dr. Dahn’s lab could be incorporated into the company’s vehicles as early as later this year.

“There are a lot of people in materials research who talk about applications, but the application is so far out there that it’s not going to happen in their lifetimes. And then there’s Jeff, who’s the opposite: it’s going to happen in a very short timeframe, maybe just in the experience of a single PhD student in his lab working on that particular problem. Sometimes when you’re working so closely with industry, as Jeff does, it can become more development than research. But in Jeff’s case, the research really drives development. He’s a serious scientist… he cares about this planet and what we’re doing to it, and he wants to do something about it.”
–Mary Anne White, professor emerita in the Department of Chemistry and founding director of Dalhousie’s Institute for Research in Materials

“He’s an excellent scientist, but it’s also his approach to science. Because he’s worked with industry for so long, his approach to problem solving is slightly different. With Jeff’s lab, you’re introduced to a real-world problem and your job is to fix it or try to understand it. There’s a lot of drive towards a specific goal, which I think is what makes our research so successful. He doesn’t rest on his laurels, or stick to his expertise. Once an area in batteries emerges which seems to be a limiting factor to the lithium-ion battery’s energy density or cycle life or capacity, he’ll move to that area. He brings together a diversity of talents to attack a problem from multiple angles.”
–Leah Ellis, currently a PhD student in Dr. Dahn’s lab 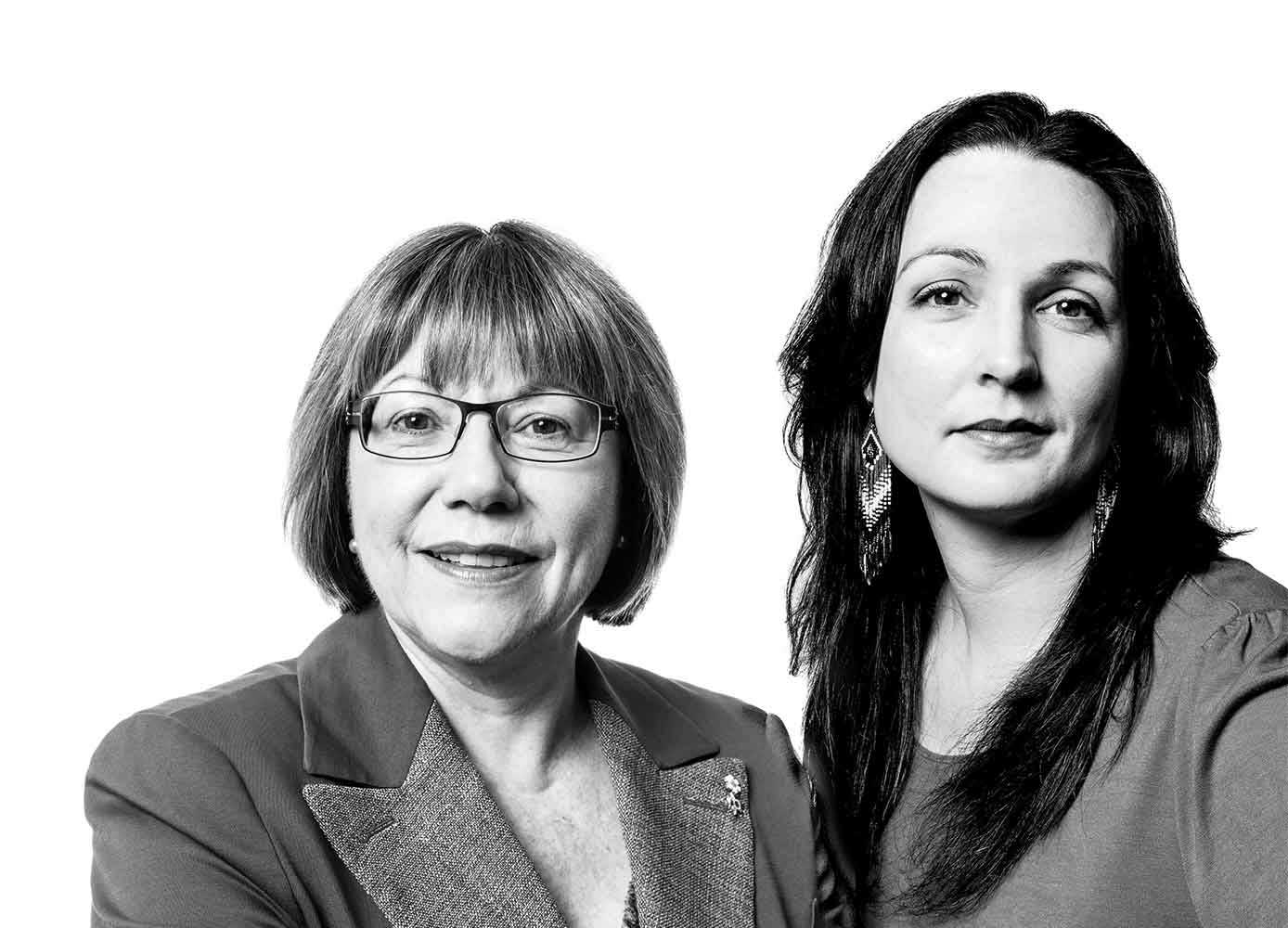 When Dalhousie Chancellor Anne McLellan studied at Dal, Aboriginal issues were rarely discussed. Now, thanks to McLellan’s funding of the Chancellor’s Chair in Aboriginal Law and Policy, lawyer Naiomi Metallic is helping ensure that’s no longer the case